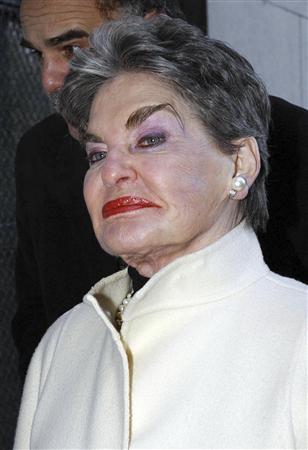 My article was originally written in English:

The Lonely “Queen of Mean"

She was born into a poor immigrant family and raised in the Coney Island section of Brooklyn during the Great Depression. Married and divorced twice, her uneventful and humble life took a major turn when she met and married a billionaire in 1972. Eventually she took over his business empire with an iron fist, and her ruthlessness earned her the infamous title, the “The Queen of Mean".

She is Leona Helmsley, who made headline news ten years ago when she was indicted and later convicted of evading $1.7 million in taxes from charging personal expenses on company accounts. I remember watching the 10-week trial closely as newspapers were full of sensational stories of how she had rudely mistreated everyone around her. She even made the cover of Newsweek, with a three-word description of her that said it all: “Rhymes with Rich". Inside there was a caricature depicting a plump queen squashing one of her subjects beneath her foot. Probably the most hated and ridiculed person in the country at the time, she had become the symbol of arrogance (she once said, “Only little people pay taxes"), greed, lawlessness and heartlessness. After denouncing her crime as “naked greed", the judge sentenced her to 4 years in prison and fined her $7.1 million dollars. I suspect most people enjoyed her public humiliation.

She served only 18 months of her prison term and then faded out of the limelight for the next ten years. I read about her release from prison on the inside page of newspapers. Later I read about the death of her husband Harry in 1997, leaving her a $1.7 billion estate. I did not see anything written about her again until this early April when the Wall Street Journal ran a front-page article on her “life after Harry".

The Continuous Fall of Leona Helmsley

The article no longer depicted a portrait of arrogance or meanness. Instead, it described how an aging, lonely and vulnerable Leona, now 80 years old, had been courted by a 45-year old man who soon became chief operating officer of her real estate empire despite having no prior experience running a business. Leona also sold many prime real estate properties to him at discounted prices. She thought she had found friendship and companionship but their relationship ended abruptly when this man’s business rival disclosed to Leona that he was gay. This episode was a severe blow to her, as she told the reporter, “I don’t trust men anymore".

The article offered a glimpse into what Leona’s life is like nowadays. She has no family (her only son from a previous marriage died tragically in 1982, and she is not on speaking terms with Harry’s children from his former marriage). She has no friends. The article described the way she lives: “.she spends many nights watching television alone in her lavish duplex penthouse atop the Park Lane, overlooking Manhattan’s Central Park. The creature that she shows the greatest fondness for is her dog, Trouble “K". Despite her vast riches, she laments, “I don’t have a life".

Once self-confident to the point of being arrogant, she has become unsure of herself and her judgment of people. She admitted to the reporter that she has lost confidence in her ability to distinguish people who genuinely like her from those who just want to get close to her money. “I’m starting to mistrust my judgment. So what I’m doing is nothing", she said. The article then went into the details of how different men have been wooing Leona for financial gains. It also recounted her fear that her life may be in danger. She even had a premonition of death recently, seeing herself “stretched out in a mortuary".

As I read the article, I couldn’t help but feel sorry for this poor woman who has little except her vast wealth. Her experience is a stark warning to those who think money is everything. John D. Rockefeller once said, “The poorest man I know is the man who has nothing but money." Jesus asked, “What good will it be for a man if he gains the whole world, yet forfeits his soul? Or what can a man give in exchange for his soul?"

A Letter to Leona

If I were to write a note to Leona, this is what I would tell her:

The article in the April 2, 2001 Wall Street Journal saddened me greatly. You have achieved a great deal in life. Yet you have found that wealth cannot fill the void inside your heart. You are right — nothing can fill this void; not money, not education, not fame, not human love or friendship. The reason is simple: none of these “things" has any eternal value and they cease to have any meaning whatsoever the very second we leave this world. Only things that are eternal can truly satisfy our hearts and souls. No wonder Saint Augustine once said, “Thou hast made us for Thyself, O God, and the heart of man is restless until it finds the rest in Thee." Only the eternal God can provide eternal things: His Word and His everlasting love for each one of us. The Bible is God’s revelation to us about His nature, His love for mankind and His plan of salvation through the acceptance of His Son Jesus Christ into our hearts. Throughout our lives God uses different circumstances and people to reach out to us. It is He who put into our nature a yearning for eternity. Would you seek Him out, and let Him fill your heart and soul with true peace, joy and hope?

This is a text widget, which allows you to add text or HTML to your sidebar. You can use them to display text, links, images, HTML, or a combination of these. Edit them in the Widget section of the Customizer.