“As we celebrate our nation’s independence, we recognize that America’s founding promise remains out of reach for too many families. Too many members of our society are still struggling to find a good-paying job or get the health care they need. Too many women, LGBTQ Americans, people of color, and people with disabilities still face inequality and injustice across our society.

“Everywhere we look, our most fundamental values are under attack. Thousands of children have been separated from their parents at our southern border. At our highest court, workers’ rights are being taken away, voting rights are under assault, Muslim Americans are being discriminated against for their faith, and women’s right to choose is under threat like never before."(“在我們慶祝國家獨立時，我們認識到美國的創始承諾對於太多家庭來說仍然遙不可及。我們社會中太多的成員仍在努力尋找高薪工作或獲得他們所需的醫療保健。太多的女性，LGBTQ美國人，有色人種和殘疾人在我們的社會中仍然面臨著不平等和不公正。

共和黨方面，只是發表一句："On this Independence Day, we pledge to uphold America’s founding principles and continue to fight for our inalienable rights: life, liberty, and the pursuit of happiness for all."（“在這個獨立日，我們保證堅持美國的創始原則，繼續爭取我們不可剝奪的權利：生命，自由和追求所有人的幸福。”），言簡意賅，比民主黨正面得多。 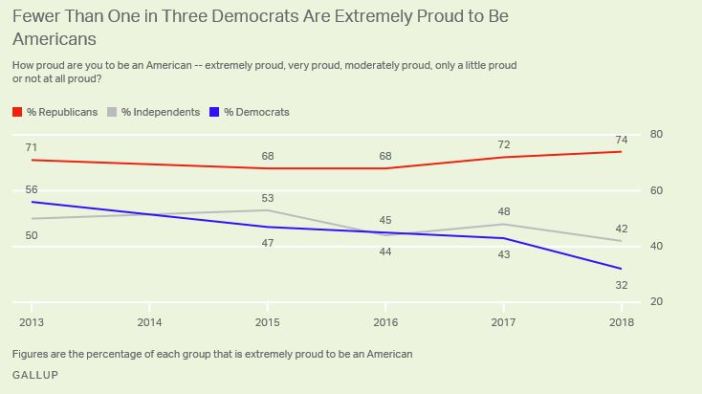 Tom Perez, chairman of the Democratic National Committee (DNC), appeared Tuesday on the Bill Press Show and, when asked about the party’s future, he replied:

I have three kids. Two of them are daughters — one just graduated college, one who is in college. And they were both texting me about their excitement over Alexandria (Ocasio-Cortez) because she really — she represents the future of our party.

If a self-declared socialist represents the party’s future, Democrats may find themselves becoming more and more irrelevant. Is that what all Democrats really aspire to? Do 31% of citizens from the land of the free and the home of the brave really hope to live in a socialist nation?

At the end of her socialist wish list, she invites supporters to become campaign volunteers:

Why doesn’t it say, “Socialism is powered by volunteers like you?”

Ocasio-Cortez’s naïveté is unmistakable. Her age and inexperience are glaring. Her platform reads like a Miss America contestant’s description of a perfect world. For starters, its implementation would bankrupt our country.

With a U.S. national debt of over $21 trillion, which climbs a little higher every day, our debt stood at approximately 105.4% (other estimates put the number as high as 107.2%) of gross national product (GDP) at the end of 2017, one of the highest in the world.

There are a few countries with a greater ratios of debt to GDP.

Japan, at slightly over 234%, has financed many stimulus projects to “jump-start” their economy over the last several decades. However, since Japanese citizens hold over 90% of the debt, at low rates of interest, it is very sustainable for the country.

The top holders of US debt are China (5.3%) and Japan (4.8%). Although 5.3% is not a large portion, and the US Treasury has never had difficulty finding buyers for our debt (even with a rating downgrade), 5.3% of $21 trillion still represents over $1 trillion of debt owed to an unfriendly nation.

Even the partial implementation of Ocasio-Cortez’s platform items would put the US in a precarious financial situation that would ultimately threaten our national security.

But, long before that would happen, her idealistic initiatives for a “peace economy” – “bring our troops home, heal our wounds, repair our image in the world” –  would probably see our mainland invaded by foreign enemies.

A thorough rebuttal of each of Ocasio-Cortez’s poorly thought out objectives could result in as many posts. Suffice it to say that it is an unworkable agenda. We can’t afford it. It’s not who we are as Americans. And I find it hard to believe that the majority of Democrats would support this platform.

The party’s “lurch to the left” is giving many Democrats pause, especially those who understand a thing or two about the US economy and national security. For example, Sen. Amy Klobuchar (D-Minn) appeared on ABC’s “The Week” on Sunday and said, “We are always going to need immigration enforcement, I think we know that. We are a major country with major borders.”

Another sign of push-back from within the Democratic party is the growing traction of the “#WalkAway Campaign.” Hair stylist “Brandon Straka started this movement, which shares video stories of people who decide to dissociate themselves from liberalism.”

And finally, many more centrist Democrats will retreat from Maxine Waters’ brand of “in your face” activism. There’s a reason why President Trump wants to position her as “the face” of the Democratic party, along with Nancy Pelosi. The credibility of both women has fallen.

So, if Tom Perez envisions a socialist future for Democrats, and chooses to believe that candidates such as Alexandria Ocasio-Cortez represent the party’s future, it is a gift to the Republican party.

This is a text widget, which allows you to add text or HTML to your sidebar. You can use them to display text, links, images, HTML, or a combination of these. Edit them in the Widget section of the Customizer.